I’ve been thinking a lot about the recent wave of shootings where police have shot and killed a suspect.  While the airwaves, websites and the print press have been filled with opinions, op-eds, blogs, talking heads, political and social pundits espousing their thoughts on the subject, not much has been mentioned regarding one of the key factors in involved a shooting, police, military or otherwise.

Along with adrenaline comes a plethora of associated issues such as, reaction time, training, psychological and emotional trauma and many other topics that are rarely, if ever mentioned by the press.

I was listening to a ‘progressive’ news station online the other day and the subject of police brutality was the topic. This news commentator was berating the officer in Chicago, and other officers who shoot supposedly unarmed suspects.  This one host made a less-than-educated attempt at portraying all police officers as wanting to just shoot and kill.  The host obviously had NO clue about any kind of police training or what actually goes into the decision to shoot and potentially end another human beings life.

So, I decided to do some research, and while I’m no expert, by a LONG shot, I am somewhat aware that firing a weapon in any kind of circumstance is not something anyone takes lightly, especially those who are highly trained to do so.  Years of training, both hypothetical and situational are required prior one serving as a police officer or military personnel.
There were three subjects that quickly jumped out at me while reading material on the subject of using weapons in a confrontational setting.

Reaction time, the psychology and physiology involved in shooting and the accuracy of firing a weapon.  Again, ALL three of these have adrenaline at the core of their effects and affects.

I’ll summarize in the vernacular, to avoid technical jargon.

Reaction time.  Basically, its been proven by scientific study that police officers have a slower reaction time than their subjects and this happened 60% of the time!  With those kind odds, who would blame police officers from reacting BEFORE it’s too late?  In fact the article stated in its conclusion, “This study does reinforce the notion that you cannot react quick enough to beat an act.”  (Blue Sheepdog, Reaction Time – Police Shooting Study)
Psychology.  Won’t go into a lot of detail here, but we are all quite aware of PTSD both in combat and law enforcement.  The study I read stated, “Killing is normally a difficult thing to bring someone to do.”  Well, duh, but we have developed ways to kill that lessen the affect on one’s psychological and physiological condition, the study says.  However, one also experiences drastic reactions to killing another human being, including but not limited to, nausea, guilt, loss of bowel or bladder control, PTSD, distance and depth-perception distortion, plus you experience things in slow-motion, and the list goes on and on.  Suffice it to way, when a policeman, or anyone, makes the decision to pull their trigger it is never a ‘pleasant’ or ‘enjoyable’ moment.  It is also never un-calculated.  (From, Beyond Intractability, On Combat: The Psychology and Physiology of Deadly Conflict in War and Peace) 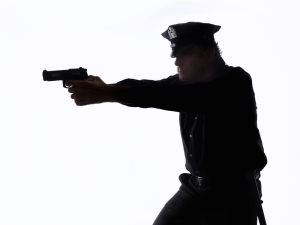 Accuracy. And finally, a lot has been made of how many shots were fired when taking down a subject.  It was interesting to me to read about the accuracy rate of police when they do fire their weapon.  A New York Times article, focused entirely on the New York City Police Department, stated, “In 2005, officers fired 472 times…hitting their mark 82 times, for a 17.4 percent hit rate. They shot and killed nine people that year.”

Raymond W. Kelly, the New York Police Commissioner at the time went on to say, “When you factor in all of the other elements that are involved…the adrenaline flow, the movement of the target, the movement of the shooter, the officer, the lighting conditions, the weather…it is a high rate when you consider all of the variables.”  (From, New York Times, December 9, 2007,  A Hail of Bullets, a Heap of Uncertainty)

Basically, the New York Times article is supporting the argument that you must factor in a host of factors when you look at the number of times an officer might fire their weapon in a given situation.

One article I read also mentioned that a police officer is not just protecting themselves in an aggressive or hostile situation with a suspect, but he is protecting the whole of society, innocent bystanders, and others who might be in harms way.

My simple conclusion in light of the Black Lives Matter movement, and a host of others who stand in opposition to police brutality is this; let’s stop berating and start educating.  It does not do any good to attack those who protect us.  They have families to go home to just like you do, and no one could ever know how many lives they’ve saved by using lethal force.

Blurring the lines between poetry and prose

If you want to be a hero well just follow me

The Boy Who Cries Wolf

The Domain for Truth
THE RIVER WALK

Daily Thoughts and Meditations as we journey together with our Lord.